More than meets the eye

Everyone pretty much knows the events of World War 2, but your basic education often skips over some of the more interesting parts of warfare.

So I’ve decided that this important time in history deserves more than your basic high school treatment.

Here are 3 things that they haven’t told you about the war and its legacy –  most likely to impress the people in your life.

During the war, being artistic wasn’t always a bad thing. In fact, the U.S. army encouraged artists to join up for the 23rd HQ Special Troops a.k.a The Ghost Army. Their job was to practice the art of deception.

You may ask, how would you do that? Well they had many tools at their disposal: 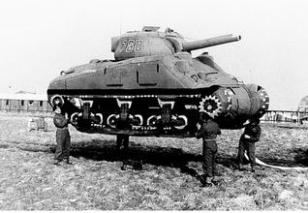 They successfully carried out 20 staged deceptions and were involved in some of the most important moments of the war. They even helped revolutionise warfare.

If you think it sounds interesting (and I certainly did!) then I would suggest checking out The Ghost Army documentary. It can give you more details than I ever could with the bonus of some funny stories from Ghost Army veterans.

Russia and Japan are still fighting a war?!

Neither Russia or Japan have actually signed an official peace treaty between them, ending World War 2.

The reason? The Kuril Islands

These Islands off the coast of Japan, but close enough to Russia, were disputed then and are still an issue to.this.day

NB: Researching this felt like reading a really poorly written soap opera where they continue the story, but replace the actors.

Maybe they should try following the saying: Let bygone be bygones?

The secret to winning a game of Monopoly

The never ending board game actually served a purpose during the war. It allowed Red Cross workers to get escape tools to the Prisoners of War in German camps.

This was in your basic kit:

For added effect, please use this fact during a game of Monopoly to Wow your friends 😉

*Sigh* why couldn’t we just all get along?

What do you get when you combine one’s interest in history and all things digital? You get a historical website of course!

As a lover of history, I have yet to see a platform, other than videogames or T.V shows/movies, that makes our past relatable and interesting. Odds being that if you don’t/didn’t like history in school then you probably won’t like it in life unless it’s hidden under a pile of fun.

I’m here to change that!

With my experience in the communications and museum world I hope to transport you to many different times and places through a multimedia time machine.

So, are you ready to begin?

Posted in Uncategorized and tagged history, Welcome | Leave a comment